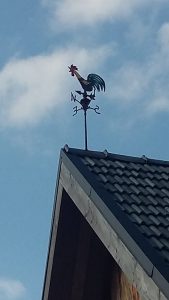 The name of the cottage is a combination of a name and surname of the owner who is famous for his hospitality and  openness. It means “under a golden rooster” as the surname is literally rooster, which is very catchy in Polish language. The owner is an extremely friendly person with an magnetizing personality and very natural and direct approach. This made a start to opening a place for friends and tourists.

But how did it start?

First, Tomek and his wife Aleksandra created their own house on the mountain land. It is a wooden house built mainly by the two alone. A lot of effort and love was put into this. There was passion, a dream of having their own place in the world and love.

But how why did they move in here? Long before that, in early 90s a person had offered a buddist teacher land in Darnkow to build a Buddhist centre. Tomek and a few friends had bought the land around. The Buddhist centre started developing and the houses nearby started to grow. Tomek met his future wife and they started settling down.

They worked hard to build a house but it was worth it. Finally there was a place on Earth that they loved. 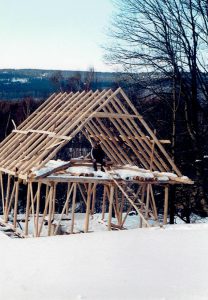 – the lodge for friends and tourists.

Tomek’s idea was to build a house rooted in a place so he put a lot of effort to use the wood from his own land – oak, larch and fruit trees wood. The  orchards had been built by the Silesian people called Schlesians who had lived here before the war. Building was not easy.  Tomek had an accident, broke his ribs and the obstacles mounted up so the building process took time. Nevertheless, the first guests enjoyed the house in 2017.

The unique beauty of the cottage and warm and comfortable interiors create unforgettable atmosphere that is hard to find elsewhere.

Sit in front of the fire, on a pear tree hand-made bench and rest. 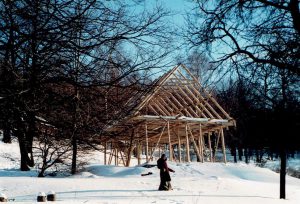 Feel welcome and peaceful in this unusual place.

Recently we have opened a new place for our guests in Kudowa Zdrój – an independent, luxurious flat in an amazing location. To read more click here http://nectarpond.pl/english/